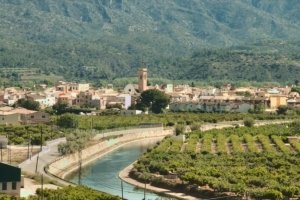 Hello and welcome to Xerta.

According to historians, Xerta has its origins in Ibero-Roman times under the name of Osikerda, which belongs to the family of Baetican names, whose primitive inhabitants were the ilercavones.

It seems that the geographic situation of Xerta, bordered by the Ebro River, has historically favoured an important agricultural production, enhanced by irrigation systems that are already documented in Arab times. Undoubtedly the definitive construction of L’Assut dam in the 15th century provided the town with a basic infrastructure, both in irrigation and in the exploitation of mills and fishing.

At the beginning of the 17th century, Xerta still belonged to Tortosa for tax purposes and, for this reason, strong arguments arose with the Tortosa authorities that led to a long process in the Royal Court.

In 1625 the intercession of Xerta native Joan Sentís, bishop of Barcelona ​​and viceroy of Catalonia, was decisive in the lawsuit and agreement which resulted in achieving its independence from Tortosa after three years, in 1628.

Later on, the construction of the locks at L’Assut dam to facilitate the navigability of the river, as well as the beginning of the Right bank canal, will set the identity mark of the village at the turn of the nineteenth and early twentieth centuries.

If you wish to know further details and curiosities about Xerta, do not hesitate to visit the places of interest proposed by this guide. Simply enter the “History Tour” section, scroll down to the chosen entry, follow the directions on the map and listen to the audio there. See you.